Teaching and complex tools ‘evolved together’ – University of Exeter

Clip source: Research news – Teaching and complex tools &apos
The human ability to teach and our use of complex tools may have evolved together, according to new research.
The improvement of technologies across generations, known as “cumulative cultural evolution”, is central to our success as a species – but its origins are a mystery.
The new study, led by the University of Exeter, tested the power of teaching on the development of simple and more complex tools – and found teaching stands out when tackling complicated problems.
This suggests that, as early humans developed more complex tools, natural selection began to favour those who could teach.
“Humans have an unrivalled ability to pass knowledge down the generations,” said senior author Dr Alex Thornton, of the Centre for Ecology and Conservation on Exeter’s Penryn Campus in Cornwall.
“Traditional theories assumed that cumulative cultural evolution requires specialised processes, like teaching, to transmit information accurately, but this cannot explain why these processes evolved in the first place.
“Our aim in this study was to test the hypothesis that these processes gradually ‘co-evolved’ with an increasing reliance on complex tools.”
More than 600 people took part in the study, forming “chains” to develop a simple tool (a boat made of waterproof paper) or a more complex tool (a basket made of pipe cleaners).
All tools were used to carry marbles, with success measured by number of marbles carried.

These designs, made by the Hall for Cornwall and a University of Exeter tutor group, held the most marbles and each won their teams £1000
The development chain involved ten “generations” – ten versions of the tool being made.
Each participant either saw the tool made by the previous person in the chain, watched the previous person make the tool (and could thus imitate and learn from them) or spoke to the previous participant – allowing teaching to take place.
“Simple and complex tools generally improved down the ‘generations’, and for simple tools this improvement was about the same in all three study conditions,” said Dr Amanda Lucas, of the University of Exeter.
“With complex tools, teaching consistently led to more improvement compared to other conditions.
“Teaching seemed to be particularly useful in allowing new, high-performing designs to be transmitted.”
Dr Lucas added: “We are incredibly grateful to local community groups across Cornwall who took part in the research, including Women’s Institutes, sports clubs, craft societies, museums, theatres, galleries, libraries and community gardeners.
“This meant that our study represented a diversity of ages, backgrounds and skills, which is important as many of these types of experiments, that intend to investigate something essential about being human, recruit a narrower sample of university students only.” 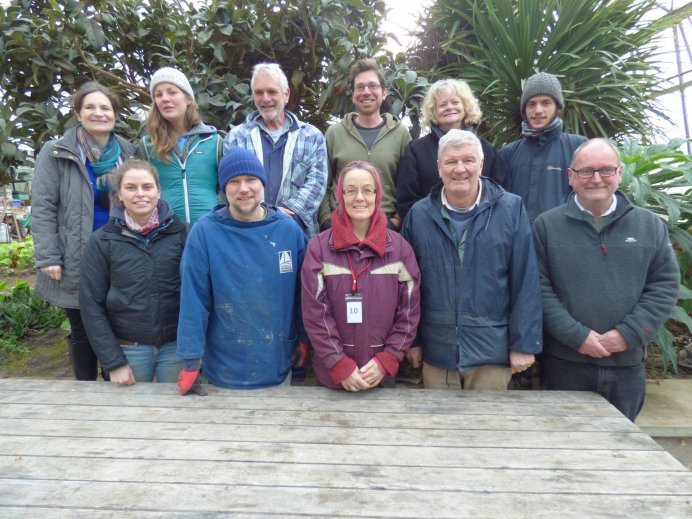 Volunteer gardeners from the Potager Garden, Constantine, were one of the many community groups across Cornwall to take part in the research
Dr Alex Thornton continued: “The effects we found were gradual – but the idea here was to look at the origins of cumulative cultural evolution, and over many generations these gradual improvements would add up.
“Our findings point to an evolutionary feedback loop between tool-making and teaching.
“This suggests that our ancestors could have started to make modest cumulative improvements to simple tools without the need for teaching, but as tools became more complex, teaching started to become advantageous.
“The evolution of improved teaching skills would in turn allow the production of even more complex and effective tools.”
The study also found that simple tools tended to “converge” towards a common design, while complex tools remained diverse and different – reflecting the diversity of technologies across human societies today.
The research team included collaborators at the University of Stirling and King’s College London, and the study was funded by the Economic and Social Research Council (ESRC).
The paper, published in the journal Proceedings of the Royal Society B, is entitled: “The value of teaching increases with tool complexity in cumulative cultural evolution.”